He has his own face. 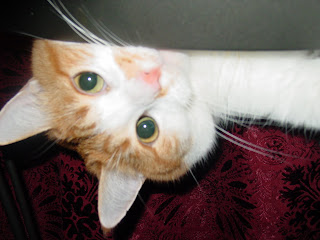 A commercial I saw years ago, a school's marching band was parading down the field in lock step, in one direction - all except one band member. He was going in the opposite direction - quite happily. He simply couldn't understand how everyone else had gotten the routine wrong but him. I like that idea. Does following the crowd mean I am right or true or acceptable or conventional? Maybe. But, there are others who are perfectly comfortable marching according to their own routine.

Some people silently catch my attention. I am not approached or engaged in conversation necessarily for this to happen. It may be his or her voice, looks, stride, gestures...sometimes I don't know what it is that catches my attention, but my attention is indeed caught. There is presence. Self. A truth there. A fullness or exposure of character. I find great joy in such moments. Possibly this individual is able to express in a way I want to express myself, yet I fear to do so. What if someone is looking or laughs or misunderstands or even worse, ignores me!

Today's blog is brought to you by the presence of just such a person, one of my former students. Since day one of being in my class, he struck me as being so fully himself without excuse or apology or apparent need to follow social convention. This is not to say he was in anyway inappropriate (indeed, another topic for another day).

I thought to myself, he "has his own face." This is an expression I learned years ago from a dear friend and companion. One would think we all have our very own faces, but how often are we copying a face we have seen? T.V. tells us what our face should look like on the outside; some how, "If I look this way, then he/she will show up in my life and I will be happy forever." Right. Sure. Okay, let's go with that. Back away slowly.

My suspicion, however, is that having one's own face is to be true to self without fear of repercussion or reprimand from the world that surrounds us. I don't know if my student was born with such a sense of presence, or grew up in a home in which such was validated. I don't know if his very "own face" is an intended face to hide yet another "face." ( fodder for yet another blog)  Maybe it is my perception of him in comparison with others or more likely with myself. Either way, "his own face" was pure joy to engage  in conversation and academic pursuits.

Such could be but perception, my own - either of myself or of others. Yet, the idea of "having my own face" intrigues and excites me. What would it be like? Do I already have it? Does this mean I must change my present face in order to have my own face? Follow a trend? Can a trend be who I am? Scary. Should I  dye my hair? Maybe having my own face begins by having my own self - inside. The face will follow with time. However, asking the question is a start. So, what might I do tomorrow or even now to reveal "my own face"?

These thoughts bring to mind one of my favorite poems, so I share it with you here:

How dreary - to be - Somebody!
How public - like a Frog -
To tell one's name - the livelong June -
to an admiring Bog!