Hi - Ain't it hot as hell and remember when? Mercy!

I hope you are enjoying this warm (tediously hot) weather. I am certainly NOT built for this sultry, humid fare, but using the right words to describe it does at least afford one the joy of creating images of Faulkner or Twain or Foster or others whose works definitely enjoyed most effectively the imagery of the south land. Such romantic features indeed  - however, often associated with a lack of cognitive aptitude or accuracy with social conventions. Well, that just ain't so, thank you kindly.

Having spent some time this past weekend hacking holly bushes in the blazing summer sun, I all but withered...I'm here to tell you.  (left a mere shadow of a honeysuckle bloom what's done lost its honey) Mercy sake!

Please give me a cave, an arctic ice chunk, or at least a couple of box fans. Some of you surely remember a time when we didn't have air conditioning - sleeping was a test of modesty or rather to hell with modesty: flat on my back, spread eagle, with only enough on to cover the (well, you know) - windows open - hopefully there was a box fan - or better, a window fan, one of those we'd get real close to and make mouth sounds, like buzzing, that would be embellished by this rotary blade, into a tremulant not unlike one found on a Hammond B-3, those organs that used to abide with regularity, faithfully in most all upstanding funeral parlors. Now, that's another topic all in itself. I shall attend to that when I attend to it.

Now, this all started with the intention to wish you a most pleasant ...summuh. (Just say "summer" and take the "r" off of it.) So, I shall part with such a wish since I would never want to say a word that is disparaging, impolite, inappropriate, unkind, or even hint at sarcasm.
Not me.
Heavens, no.
Have mercy.
God bless it; (h)it don't know no bett-uh.
Bye for now...                  Damn, it's too hot already. 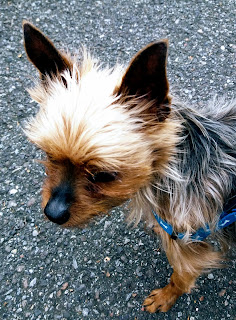 Meet Margo -
my dear doggy companion; she's a rescue Yorkie. Smart and full of energy and full of barks. Love her. She is named after the character Margo Channing (thus the name - another Diva)  in All About Eve starring Bette Davis, Ann Baxter, Celeste Holme - made in 1950 - B/W film - a classic. I hope some of you know this film. I made a reference to it recently to my students - no connection. I think I may be getting old.